A Sexy Romantic Comedy With An Olympic Medal-Winning Hero

The Google Doodle informed me that today is the 120th anniversary of the modern Olympic games. So...clearly it is time to remind you that I've got a book with a hero who stood atop the medal stand!

If you like smart men, computer geeks who just happen to be ex-Olympic athletes dripping with sexy handsomeness (but don't know it), then have I got a book for you! A Matchless Romance has the aforementioned cluelessly sexy hero. A sassy heroine. The fabulous city of Chicago. Two weddings, in full, romance-drenched detail. And tons of laugh out loud moments. 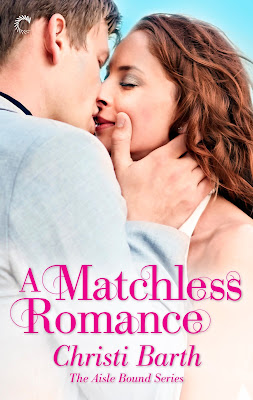 Tabitha Bell is the face of Chicago's premiere matchmaking service. At least, she hopes it will be someday, once business really takes off. What she needs is more clients, so when she meets a sexy gamer in need of help, it's the perfect opportunity.
His discomfort talking to women almost cost Drew Watson his job. He'd be happy holed up in his office, designing blockbuster video games, but his boss considers talking to investors a nonnegotiable requirement. Who better than a matchmaker to teach him how to be comfortable around the opposite sex? Trouble is, Drew wants to get more than comfortable with Tabitha, while she's determined to keep their relationship all business.
Soon Tabitha learns that beneath the geek-chic hoodie lies six feet of sexy physique—and the more time she spends with Drew, the more she appreciates his brainy brand of charm. Will she succumb to his sweet-but-nerdy charm offensive or will it be game over before he can win her heart?

Purchase at Amazon | Barnes & Noble | Carina Press | iBooks
Here's a sneak peek at the very beginning:
No matter how fast Drew Weston ran down the tree-lined Chicago street, he couldn’t escape his problem. Even if he managed to strap turbo thrusters to his shoes, it wouldn’t make a difference. Aside from looking kick-ass cool, that is. Huh. The row of old brownstones behind black wrought-iron fences faded out of focus as his mind clicked into designer mode. Turbo sneakers. Interesting idea to work into his next video game. That is, if his boss-from-hell gave him the chance to come up with a new game after he got Quest rolled out . Thinking about Keiko fueled his frustration, and he put on a burst of speed.
Which plowed him right into the soft curves of a woman. Moving solely on reflex, Drew grabbed what he could. It happened to be her lush ass. He spun to slow his momentum and keep them both from crashing to the ground. They ended up plastered against a glass storefront. Late afternoon April sunlight haloed around her deep red hair. The sensual hits didn’t stop there. Her thighs were tight to his, breasts crushed to his chest, and glossy peach lips parted in surprise. Wow.
This was the closest he’d been to a woman in ninety-four days. Ninety-four endless days—and endlessly frustrating nights—since he’d last had sex. ’Cause yeah, he’d been counting. They might be vertical right now, but the position definitely put Drew in mind of horizontal hijinks. Made him wonder if the thick black lashes on those green eyes of hers would flutter shut if he pressed his mouth to hers.
“Did you run into me just to cop a feel?” she asked in a husky voice. One that sounded like the beautiful redhead had rolled out of bed after screaming her pleasure to the rafters for three rounds.
“No.” What kind of creep did she take him for? For God’s sake, this wasn’t some sleazy alley at midnight. Sure, he’d gotten off of the El at the wrong stop, so Drew couldn’t pinpoint his location. But this street was only a block away from what the bumper-to-bumper traffic he’d seen lurching below the train indicated was a main drag. He’d jogged by a couple of boutiques and art galleries as he tried to run off his irritation. All he’d really done was feel stupid for running in jeans.
Her eyes narrowed. “Then is this your lame signature move? Did you figure that once we sidewalk snuggled, I’d be putty in your hands?”
“No.” Drew knew just enough about women to know it was never that easy. “I figured running into you was better than making you fall down. Lesser of two evils. But I’ve gotta say, the result doesn’t suck.” After all, the hot mystery woman still hadn’t pulled out of his loose embrace.
“Thanks.” High, arched eyebrows gave her a look of being in on a joke with the rest of the world. “Now do you maybe want to let go of my ass?”
“Wouldn’t be my first choice. It’s a pretty terrific ass.” Nevertheless, Drew dropped his arms to his sides. He didn’t want to scare the pretty woman Fate had dropped into his path.
Website | Blog | Pinterest | Twitter | Goodreads | Amazon Author Page |Facebook
Posted by Christi Barth at 1:26:00 PM