Indulge in a New Historical Romance!

Sure, I'm a contemporary and PNR girl at heart. But every once in a while, who can resist the lure of a swashbuckling hero in breeches, the swish of petticoats, and all things being motivated by honor? So here is your new release of a historical to take you back to the fun of love in the nineteenth century! 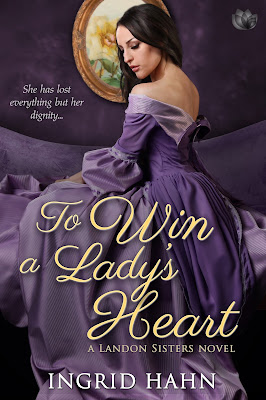 She has lost everything but her dignity...

England, 1811. When John Merrick, the Earl of Corbeau, is caught in a locked storeroom with Lady Grace, he has but one choice—marry her. He cannot bear to tarnish any woman’s reputation, least of all Lady Grace’s.

Lady Grace Landon will do anything to help her mother and sisters, crushed and impoverished by her father’s disgrace. But throwing herself into the arms of her dearest friend’s older brother to trap him in marriage? Never.

Corbeau needs to prove that he loves her, despite her father’s misdeeds. After years of being an object of scorn, not even falling in love with Corbeau alters Lady Grace’s determination to not bring her disrepute upon another. However, if they don’t realize that the greatest honor is love given freely without regard to society’s censure, they stand to lose far more than they ever imagined.

He held the bright red berries toward her. “It’s up to you to save me from my vice.”
“You don’t know how long it’s been since I’ve had a strawberry. A real strawberry, not preserves.”
He plucked one up by its little crown of leaves and offered it. “Well then?”
“Maybe...maybe just one.” Absently, she slid the metal base of her candle stand next to his on the shelf.
“Go on, Grace.”
“Then again.” She bit into her bottom lip. “I don’t know if I can restrain myself to only one.”
An unfortunate second interpretation of what it would be for Grace’s restraint to dissolve sent a rush of heat down to a place that needed no such coaxing.
His voice lowered, texture roughening. “I’m giving you every encouragement not to.”
“But if I start, I don’t think I can stop.”
“Funny. That’s precisely how I feel.”
Posted by Christi Barth at 7:25:00 PM