Welcome to #MySexySaturday! This week's theme is My Sexy Love, so I've got a scene from Love At High Tide for you where the hero first starts to really fall for the heroine. Plus, the whole thing is set at the beach - perfect for a holiday weekend! 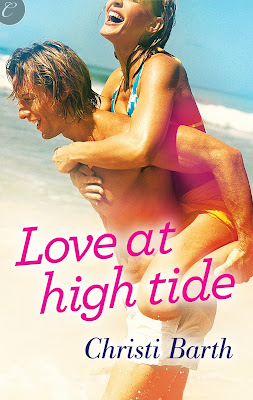 Darcy’s arms encircled his waist. Coop jerked in surprise, then relaxed into the loose embrace. An empathetic hug had not been on his list of expected reactions. In fact, he’d kind of expected her to walk away from his worthless, sorry ass. Instead, she pressed her chest into his back,
cheek pillowed on his shoulder. It soothed him like aloe on a bad sunburn. Not registering any judgment from her soothed him even more.

Now that, he had expected. “Join the club. Nobody knows what to say. How to deal with me. That’s why my family sent me out here to our beach house. Give me some time and space to get my head together.”

“That could take a while. How together was your head before all of this?”

The teasing jab, delivered while she still hugged him, gave him a dose of normalcy his family didn’t. They all walked on eggshells when they spoke to him. It was about time someone yanked his chain. Coop tugged on her arm until she moved between him and the rail.

“Maybe I don’t need space after all. Maybe what I really need is someone to share my space.” He caged her in with his arms. The scent of lemons and vanilla floated off her waves of hair. Coop buried his nose and took a good whiff. Now he wanted to smell that on her everywhere.


Darcy arched her neck, giving him better access. She flattened her palms against his chest. “Are you asking me to move in with you? Because I think we should at least have dinner before making that sort of commitment."

Want to know more about this ultimate beach read?
Darcy Trent is lucky Cooper Hudson is on hand to sweep her off her feet—literally—when she nearly drowns while swimming in the ocean. But life-saving aside, Mr. Perfect's timing stinks: Darcy's career is about to take her to the complete opposite side of the Atlantic. Still, a little summer loving with the tall, blond and sexy former cop is far too tempting to pass up.
When his plans to enter the Secret Service went south thanks to a bum knee, Coop retreated to the family beach house to mull his future. Romance is the last thing on his mind, until he fishes a curvy brunette out of the sea. Now, spending time in Darcy's arms seems like the ideal distraction, even if it is just for a week.
But with Darcy's departure date fast approaching and their careers on the line, can they realize in time that their beach fling might become the real thing?

Don't forget to check out all the other sexy Saturday blogs!

You are cordially invited to the event of the season, the release of THIS WEDDING IS DOOMED, a continuity by Stephanie Draven, Jeannie Lin, Shawntelle Madison, and Amanda Berry. In these stories of matrimonial madness, unexpected couples find their happily ever after at a wedding that’s counting down to disaster… “I’ll tell you what I really think,” Blake said, tilting his head in a way that made the dark aura of mistrust around him evaporate into bright pink passion. “I really think you should let me kiss you.”

He leaned in, his handsome face coming closer and closer, until she was warmed by his minty breath. His arms wrapped around her and an instant later, she felt the familiar rush of warmth on her skin that left her helpless to do anything but yield to his mouth as it brushed against hers.

It was a soft, tender, kiss, the golden whiskers of his close-trimmed goatee tickling her face. Then the kiss deepened, charged with a giddy sexual energy that emboldened Penny to kiss back.

This kiss was nothing like the sweet kisses back in high school. This was a grown-up kiss, so intense it left her a little breathless, and sent her heart beating so fast she thought it might explode. It must have exploded, because she heard the sound. A dozen little pops that ended in a ka-boom!

Startled, Penny leapt to her feet, chilled by the cool air in the space between their bodies. “What was that?”

“Jumpy much?” he asked, touching the corner of his lip as if savoring the lingering taste of their kiss. “It sounded like champagne corks,” he said, rising to stalk toward her, his eyes still bright with lust. “It’s a wedding. This is a celebration, Penny.”

Yes, it was. He’d kissed her. He’d just kissed her. And she’d kissed him back. After all these years, they were kissing again, and it made her want to clink a crystal glass in a celebratory toast or spin around on her toes. But then she remembered that they were at someone else’s wedding…where she was the other woman.

“As best man, shouldn’t you, I dunno, be making sure everything’s okay?”

“No can do,” he said, with mock gravity.

“Why not?” He looked down at himself, to where his vest cut snugly over his dress shirt. “My bow tie is all undone and I don’t know how to tie it. Can’t let the guests see me looking slovenly.”

“C’mere,” she said with a nervous laugh, sliding her hands up to his collar and taking the ends of the black tie in hand. “I know what to do with it.”

“Oh, me too,” he said, suddenly tugging the satin free of her fingertips.

With a quick grab, Blake brought her hands together and wound the tie around her wrists—a deft move that both mesmerized her and stole her breath away.

Titillated, teased, and a tiny bit terrified, Penny asked, “What are you doing?”

“Trussing you up,” Blake said, tugging her bound hands over his neck, trapping himself in her embrace. “You don’t think I’m gonna let you get away from me as easily as I did back in high school, do you?”
Posted by Christi Barth at 11:14:00 AM No comments: