I am absolutely thrilled to bring you the Cover Reveal for Laura Kaye's RIDE HARD! Releasing April 26, 2016, RIDE HARD is the first novel in Laura’s Raven Riders Series, a spin off from her New York Times and USA Today bestselling Hard Ink Series, published by Avon Romance an imprint of HarperCollins. Pre-order your copy of RIDE HARD today! 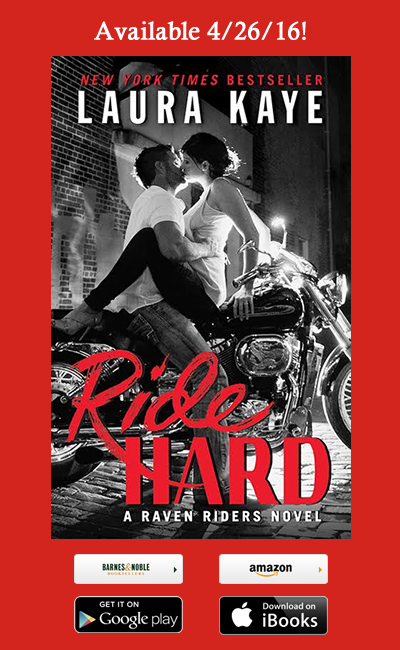 Add to your Goodreads

About RIDE HARD:
Brotherhood. Club. Family. They live and ride by their own rules. These are the Raven Riders… Raven Riders Motorcycle Club President Dare Kenyon rides hard and values loyalty above all else. He’ll do anything to protect the brotherhood of bikers—the only family he’s got—as well as those who can’t defend themselves. So when mistrustful Haven Randall lands on the club’s doorstep scared that she’s being hunted, Dare takes her in, swears to keep her safe, and pushes to learn the secrets overshadowing her pretty smile.

Haven fled from years of abuse at the hands of her criminal father and is suspicious of any man’s promises, including those of the darkly sexy and overwhelmingly intense Ravens’ leader. But as the powerful attraction between them flares to life, Dare pushes her boundaries and tempts her to want things she never thought she could. The past never dies without a fight, but Dare Kenyon’s never backed down before…

About Laura Kaye: Laura is the New York Times and USA Today bestselling author of over twenty books in contemporary and paranormal romance and romantic suspense, including the Hard Ink and upcoming Raven Riders series. Growing up, Laura’s large extended family believed in the supernatural, and family lore involving angels, ghosts, and evil-eye curses cemented in Laura a life-long fascination with storytelling and all things paranormal. She lives in Maryland with her husband, two daughters, and cute-but-bad dog, and appreciates her view of the Chesapeake Bay every day.

I love finding new authors to try. There's a sense of ownership when you do, like bragging about a new restaurant everyone must try. And I love it even more when (full disclosure) they are my friend! So check out this great start to a new romantic suspense series: 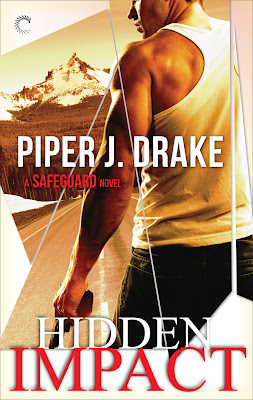 He’s not the hero she’s looking for
As part of the elite Centurion Corporation team, military-veteran-turned-mercenary Gabriel Diaz is a natural defender. He’ll do anything to ensure a mission is successful. Anything but get emotionally invested—he learned the hard way that can be deadly. Easy bodyguard jobs in between the more challenging missions are all he’s interested in now.
Maylin Cheng is desperate and running out of time. Her younger sister has gone missing but no one seems to take her concern seriously. Her last hope lies in asking an aloof bodyguard for help. He dismisses her outright, but all that changes when she is almost killed in a not-so-accidental hit-and-run right before his eyes.
As Maylin leans on Gabriel, she begins to rely on him for more than just her safety. But as their attraction grows, so does the danger surrounding them. When the elaborate web they’re trapped in unravels, Gabriel will do anything to protect them. Even if that means putting his heart in the crosshairs.
Book one of the Safeguard series
Kindle / B&N /  Google Play / Kobo / iBooks:
Excerpt:
Breathe.
She gasped and cool air rushed in, clearing away some of the fog.
“That’s it, sweetheart. Take another breath nice and slow. Slow.” Strong hands patted her down, touched her with gentle purpose. “Does anything hurt? Your neck, your head?”
“The way you took her down, it’s amazing her skull isn’t splattered all over the sidewalk.” Another man’s voice floated over from some distance away. Or was it a shock thing?
Maybe she was in shock.
Did people’s feet get cold at times like this? Only her left one.
“Your left foot is colder because you lost a shoe when I shoved you out of the way.” A thread of amusement ran through the original speaker’s voice. She liked the sound of it. Kind humor, like what she heard in his words, was the sign of a good man. “I’m going to help you to a sitting position, but if anything hurts at all, you let me know right away and we’re laying you back down. Understood?”
“Yes.” She said it out loud on purpose, because she was pretty sure she’d been talking out loud anyway so it’d be good to know if she could do it when she actually meant to.
The same big hands she’d taken note of before took hold of her, one sliding under her neck to give her support as she came up to a sitting position.
“Slow,” her caretaker admonished.
His choice of speeds was frustrating.

Piper J. Drake
piperjdrake.com
Posted by Christi Barth at 1:42:00 PM No comments: Links to this post

Let's face it - rock bands are sexy. And not just because the lead singer tends to rip off his shirt. The unattainable famous bad boy is an awesome fantasy. At some point, whether it lasted a day or ten years, everyone went through a phase where they had the hots for a rocker. Today is the release of book one in my Bad Decisions trilogy, where you can get your fill of sexy rock gods, hot hook-ups and band drama. 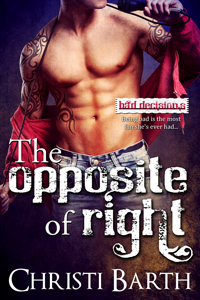 For just a second, white teeth worried at her lower lip. In exactly the spot he wanted to sink his own teeth. “Um, can I ask you something?”
“Sure.”
Her tongue shot out to slick across her lips. God, the woman was killing him. And she probably didn’t even know the effect she had on him. In a quiet voice, Kylie asked, “Why me?”
“You did great tonight. You’re here. Apparently, you’re available. Sometimes things just line up right.”
“Like our lips, earlier tonight.”
Cam shot a desperate glance at the door. Sadly, everyone in the music industry treated the post-show closed door with a solemn reverence. Nobody would interrupt them even if John Lennon came back to life. Why the hell had Jake trusted him to be alone with Kylie? “Yeah, about that.”
Kylie straddled him. Hooked her wrists behind his neck. “We were interrupted. Let’s pick up where we left off.”
Heaving a deep breath, Cam said, “That’s not a good idea.”
The wide-eyed enthusiasm disappeared, replaced by a knowing, sultry look full of promise and passion. “That’s exactly why I want to do it. Bad decisions are a recent specialty of mine.”
“No, I mean, I promised the guys.” Cam kept his promises. Sure, he thought this particular one was stupid, but he still planned to keep it. Performing was the equivalent of stripping yourself naked in front of hundreds, if not thousands, of people. There had to be deep trust between the people doing it with you.
She licked her lips again. And it was obvious that this time she did it on purpose, eyes locked on his. “What, you’ve saved your lips for them alone?”
Funny girl. Funny girl with soft breasts pressed tight against his chest. And thighs that kept grinding her pelvis against his. “I promised them no hanky-panky on the bus.”
“We’re not on the bus yet.”
Smart girl, too. Cam did love a good logic loophole. No one could fault him for obeying the letter of the law instead of the spirit. Or if they did, he’d at least have a decent defense. With his last shred of self-control, he shook his head. “It wouldn’t be right. You work for me.”
“Not yet. I haven’t signed on the dotted line. In fact, I’m not even sure if I have a pen on me to sign.” In one swift movement, Kylie whipped her Riptide shirt over her head and tossed it on the floor. “Maybe you could help me look for it?”
Creamy breasts just big enough to fill his palms spilled out of low-cut black lace. The lace was sheer enough he could see the color of her nipples through it. They were about three shades paler than her hair. Sexy as hell. He’d been hard since the moment she sat on his lap. But now he was hard. Ramrod hard. Steel-girder hard. Could break a stack of boards with just his penis hard.
Cam wasn’t sure if he was giving in to his lust, or just giving in to the inevitable. He didn’t care. Framing her breasts, capturing their weight in his hands, he groaned, “God, you’re beautiful.” Then he licked a long, wet line along the edge of her bra. Kylie felt like satin and tasted like sin. It was his favorite combination.
“Help me be bad,” she whispered into his hair.
He was a rock ’n’ roll star. It was practically a contractual requirement to say yes to an offer like that. Still, Cam had standards.
“Let me make you feel good,” he offered instead.

Bio: Christi Barth earned a Masters degree in vocal performance and embarked upon a career on the stage.  A love of romance then drew her to wedding planning.  Ultimately she succumbed to her lifelong love of books and now writes award-winning contemporary romance.  Christi is President of the Maryland Romance Writers and lives in Maryland with her husband.
Posted by Christi Barth at 9:53:00 AM No comments: Links to this post

To the Wedding of the Year

About Hard Ever After:
Justice served. Honor restored. Team reunited.

After a long battle to discover the truth, the men and women of Hard Ink have a lot to celebrate, especially the wedding of two of their own—Nick Rixey and Becca Merritt, whose hard-fought love deserves a happy ending.

As Nick and the team shift from crisis mode to building their new security consulting firm, Becca heads back to work at the ER. But amid the everyday chaos of demanding jobs and their upcoming nuptials, an old menace they thought long gone reemerges, threatening the peace they’ve only just found.
Now, for one last time, Nick and Becca must fight for their always and forever, because they know that when true love overcomes all the odds it lasts hard ever after.


Order on Amazon | B&N | iBooks | Kobo
Add to your Goodreads 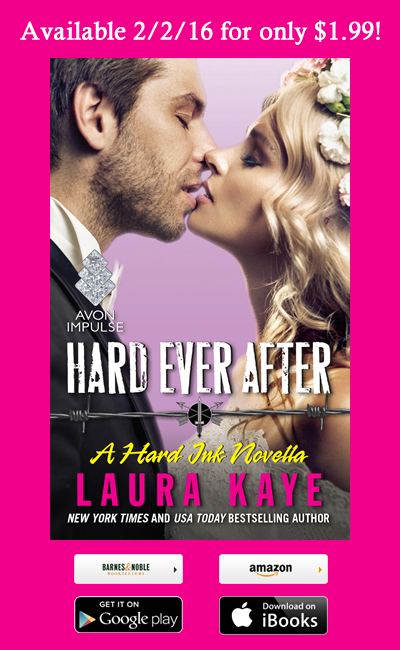 About Laura Kaye: Laura is the New York Times and USA Today bestselling author of over twenty books in contemporary and paranormal romance and romantic suspense, including the Hard Ink and upcoming Raven Riders series. Growing up, Laura’s large extended family believed in the supernatural, and family lore involving angels, ghosts, and evil-eye curses cemented in Laura a life-long fascination with storytelling and all things paranormal. She lives in Maryland with her husband, two daughters, and cute-but-bad dog, and appreciates her view of the Chesapeake Bay every day.
Website | Facebook | Twitter | Newsletter SignUp
Posted by Christi Barth at 10:21:00 AM No comments: Links to this post