Sweet And Oh-So-Sexy Next Installment In The Hard Ink Series!

You know when you love a series so much that you literally count down the days until the next book release? That's how I am with Laura Kaye's Hard Ink series. So I'm thrilled to announce that it is finally release day for Jeremy & Charlie's story! 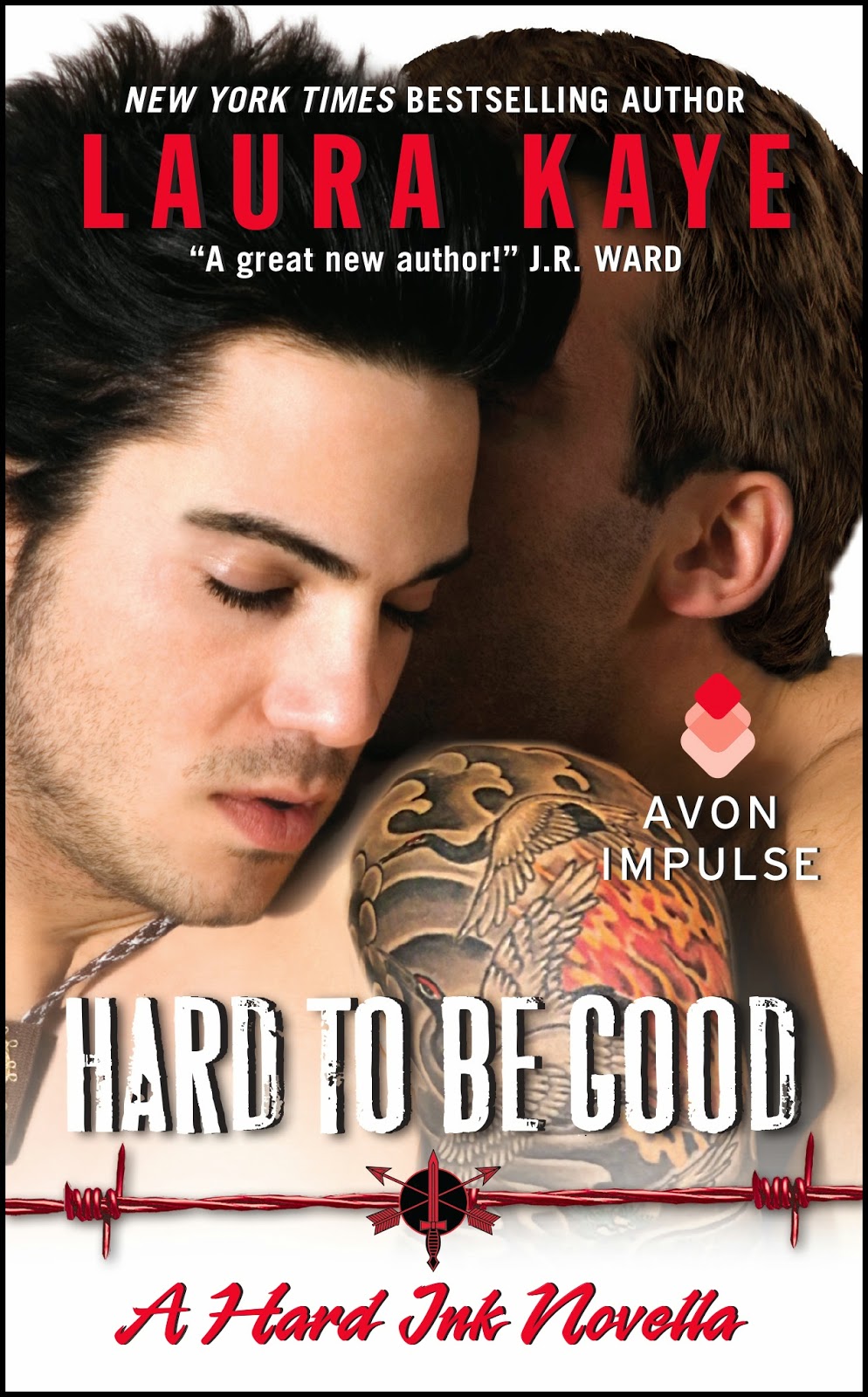 Hard Ink Tattoo owner Jeremy Rixey has taken on his brother’s stateside fight against the forces that nearly killed Nick and his Special Forces team a year before. Now, Jeremy’s whole world has been turned upside down—not the least of which by a brilliant, quiet blond man who tempts Jeremy to settle down for the first time ever.

Recent kidnapping victim Charlie Merritt has always been better with computers than people, so when he’s drawn into the SF team’s investigation of his army colonel father’s corruption, he’s surprised to find acceptance and friendship—especially since his father never accepted who Charlie was. Even more surprising is the heated tension Charlie feels with sexy, tattooed Jeremy, Charlie’s opposite in almost every way.

With tragedy and chaos all around them, temptation flashes hot, and Jeremy and Charlie can’t help but wonder why they’re trying so hard to be good...

The gloriously sexy excerpt:
“You should be inside celebrating,” Jeremy said, his voice a raw scrape. “You and Marz did an amazing thing this morning.” An hour ago, Marz and Charlie had cracked open a heavily encrypted microchip that contained a wealth of information that not only seemed likely to help the team clear its name, but proved that Charlie’s father hadn’t been dirty, like they’d all thought. “And I’m so happy for you about your dad.”
A wounded darkness passed through Charlie’s gaze, but he finally nodded. “Didn’t feel right without you there.” Pink filtered into his cheeks, and damn if that wasn’t as cute as it was sexy. Jeremy wasn’t sure anything had ever made him blush.
“I’m just not—” Jeremy shrugged and looked down at Charlie’s chest again. Having seen the guy dress more than once, he knew that shirt covered lean muscle that ran from strong shoulders down to his narrow hips. Jeremy fisted his hands against the urge to burrow them under the hem of the tee. After weeks of looking, and wanting, he was dying to touch. Jeremy found Charlie hard to read though, and hadn’t wanted to do anything to scare him off. “—very good company right now. I’m sorry if that—”
Charlie nudged Jeremy’s chin up with his hand, his fingers just barely touching Jer’s stubble-covered skin. But then his thumb landed softly against his lips.
Jeremy’s heartbeat kicked up and his lips fell open. Slowly, oh so tentatively, Charlie stroked the soft pad of his thumb back and forth across them.
“Charlie,” Jeremy whispered as arousal surged through his body, spiking his pulse, tensing his muscles, hardening his dick.
Uncertainty poured off Charlie as the man’s hand trembled where it touched him, but those blue eyes absolutely blazed desire. No way was Jeremy imagining that.
“You’re always good company, to me,” Charlie said in a low voice, his gaze dropping to Jeremy’s lips. Charlie leaned in closer, and closer still, and Jeremy could hardly believe the other man was the one to initiate this. But he was fucking thrilled.
Jeremy swallowed, his lips anticipating that first soft brush. Charlie was so close his shaky breath caressed Jeremy’s lips. His pace was maddening but so damn sexy Jer could barely breathe. And then Charlie’s eyelids fluttered closed and he was right there…

And don’t miss the other Hard Ink books, now available:
Hard As It Gets
Hard As You Can
Hard to Hold On To
Hard To Come By

Praise for the Hard Ink Series:


"TOP PICK! If you're looking for danger, gritty action, and sizzling passion, then Kaye has just the book and the series for you." ~RT Book Reviews Magazine

Laura is the New York Times and USA Today bestselling author of over twenty books in contemporary and paranormal romance and romantic suspense. Growing up, Laura’s large extended family believed in the supernatural, and family lore involving angels, ghosts, and evil-eye curses cemented in Laura a life-long fascination with storytelling and all things paranormal. She lives in Maryland with her husband, two daughters, and cute-but-bad dog, and appreciates her view of the Chesapeake Bay every day.