I've got a treat for you. I'm one of the sponsors of the Night Owl Reviews WINTER WONDERLAND Scavenger Hunt.

During this event I'm going to help you find some great new books. Make sure to check my featured title out along the way.

And don't forget that I have not one, but TWO Christmas novellas to also help you celebrate the season! 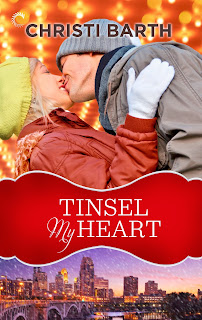 Becca Huntley's produced the Lyndale Park Players' over-the-top Christmas show for ten years. It's a beloved Minneapolis tradition, and the theater's main fundraiser. But this year's production is in danger of being canceled when their director disappears into rehab. Good thing his directing partner steps in to save the day. Except for the minor fact that he hates everything about Christmas.

Jack Whittaker wiped this town off his shoe with his graduation tassel and never looked back. But duty compels him to fulfill Tyler's promise to direct the show. Even though it means working with Becca, the girl he always wanted, lost to Ty, but never forgot.
It'll take more than a few handfuls of tinsel to soften Jack's heart toward Becca's favorite holiday. Steamy kisses that melt the snow right off his boots are a step in the right direction. They'll both discover that Christmas is about making each other's dreams come true. But will it require sacrificing their chance at a happily-ever-after together? http://amzn.to/2fZIiJn

Caitlin McIntyre's heart stops when her best friend drops to one knee and proposes. Kyle Lockhart never once hinted over the years that he has any idea she's in love with him. Not wanting to jeopardize their friendship, she's never let it slip. Good thing, too, since it turns out he's only practicing—he's about to propose to someone else.
A business merger might not be the most romantic reason to propose to a woman he barely knows, but Kyle's determined to win the respect of the dying father who's never seen him as quite good enough. Kyle's always depended on Caitlin's friendship, while trying to ignore the physical response she arouses. So he turns to her when it comes time to craft his proposal, not realizing his decision will affect their relationship, forever.
This Christmas, Kyle and Caitlin get one last chance to admit their feelings for each other, and find a mutual happily ever after, before he commits his life to another woman and Caitlin leaves town and him…for good. http://amzn.to/2fJgt8H

Laura Kaye’s HEARTS & INK, the adult coloring book inspired by her award-winning and bestselling novels releases today! Thirty exciting and original designs will inspire, relax, and entertain fans old and new! Grab your pencils and crayons and get ready to read - and color - hard!

A Note from Laura:

Friends! I am so excited to share that I’ve worked with the awesome Jessica Hildreth at Creative Book Concepts to design my first adult coloring book based on my bestselling books! HEARTS & INK features 30 original designs with quotes from the books, iconic images, and fun backgrounds that I hope will excite long-time fans and intrigue new-to-me readers! I drew the title from my two bestselling series: the HEARTS in Darkness Duet and the Hard INK books! But you’ll also find pages from my new Raven Riders and Blasphemy series, my older paranormal series (the Hearts of the Anemoi based on Greek mythology, my Vampire Warrior Kings series, and my stand-alone novel, Forever Freed). Plus an absolutely gorgeous page from my historical fiction, America’s First Daughter (written as Laura Kamoie). So there’s a lot here to explore and color!

COLOR/POST/WIN GIVEAWAY CONTEST! For your chance to win one of 5 $10 Amazon or B&N gift cards, simply COLOR a page from my coloring book, POST it to Facebook or Twitter using the hashtag #HeartsandInk by November 30 at midnight EST, and look for my posts on December 1 to see if you won!

New York Times Bestselling Author Laura Kaye invites you to immerse yourself within her fictional worlds with this adult coloring book inspired by her award-winning and bestselling novels. Thirty exciting and original designs will inspire, relax, and entertain fans old and new! Featuring book quotes and a variety of simple and intricate designs with lots of colorable space, there’s something for everyone to enjoy. So grab your pencils and crayons and get ready to read - and color - hard!

About Laura Kaye: Laura is the New York Times and USA Today bestselling author of over twenty books in contemporary and paranormal romance and romantic suspense, including the Hard Ink and upcoming Raven Riders series. Growing up, Laura’s large extended family believed in the supernatural, and family lore involving angels, ghosts, and evil-eye curses cemented in Laura a life-long fascination with storytelling and all things paranormal. She lives in Maryland with her husband, two daughters, and cute-but-bad dog, and appreciates her view of the Chesapeake Bay every day.