Hot Sex, Wine, Romance & Laughter All In One New Release!

I started dropping hints in book one of the Shore Secrets trilogy about Ward and Piper. They were two in a group of four best friends in a small town filled with wineries. Except...when the other two BFFs weren't around, Ward and Piper shot to opposite sides of the room. Weird, huh? Then in book two I dropped more hints. Showed that Ward always remembered exactly how Piper liked her coffee, and gave her his shirt in the cool lakeside air. Yet still, they stuck to opposite ends of the room. For those of you who picked up on the love/hate chemistry, your wait is over. It is release day for the last book in the trilogy, and you'll find out everything you wanted to know about their history. 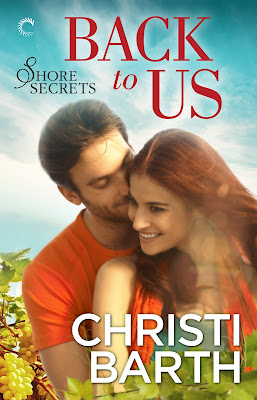 Ward Cantrell always went for the long shot. But that recklessness cost him his college scholarship and his chance to play pro ball, and—worst of all—it ended his relationship with the girl next door. Neither the town nor the girl has ever forgiven him. Now he’s taking one last long shot by opening a boutique distillery on the family farm he inherited.

Piper Morrissey spent high school in Ward’s shadow, but she’s come into her own in the years since. Maintaining her spotless image, and that of her family’s winery, is priority number one. Nobody knows that she still yearns for her golden-boy ex. Or at least they didn’t—until Ward agrees to sell Piper the land she needs to start her precious port line. The caveat? She’ll need to date him for one month.

Ward hopes a month is all it’ll take to convince his former sweetheart that while he’s changed, his love for her hasn’t. But when the chance arises to thumb his nose at the town that turned its back on him, he can’t afford not to reject Piper’s offer. Will that make her reject him and his love—for good?

Excerpt:
“Don’t you ever go with your gut?” He sauntered closer.
“That’s risky.”
A devilish smile flashed across his face. “That’s the fun part.”
“We can argue over business strategies—or lack thereof—later,” she said archly, giving him a disapproving glare down her nose. “I’m going to have to insist on time to weigh the pros and cons.”
“It’s Wednesday. I’ll give you until this time on Friday.” He closed the distance between them in one long stride. “I’ll give you something to start off that pro/con list with too.”
Ward bent, putting his lips on hers before Piper could decide whether to scoot out of reach or not. Probably because a part of her couldn’t believe it was actually happening. There was a very strong possibility she’d passed out from exhaustion and this whole thing was a dream. It was the likeliest explanation for the morning’s strange turn of events.
But the warm slide of his lips pulled her straight out of her head and rooted her firmly in the moment. This moment. What she’d dreamed about and hoped for didn’t hold a candle to the reality of Ward, her Ward, finally claiming her again with a kiss that seared her down to her core.
He planted his hands at her waist and lifted, lips never breaking contact. Lips, heck—tongue never breaking contact. Even as he raised her high enough that her feet left the floor, Ward’s tongue swept around every inch of her mouth. Every nerve-laden inch. Every sensitive, tingling inch.
Piper needed to touch. Needed to greedily take him with the same heat he was lavishing upon her. Her hands fisted in his hair. Ward nipped at her bottom lip in response. So she wrapped her legs around his waist. That elicited a growl, and Ward braced her back against the wall. Then he pushed close. Pushed that muscled chest and those ripped abs against her body. Canted his hips to push something else even harder against the vee where her legs met. At that, they both moaned.
The rasping brush of his stubble burned in an oh-so-sexy way as Ward angled down her neck. At her indrawn breath, he paused to suck and lick at the spot right on top of where her pulse fluttered rapidly. Because, oh, the things he did to her. The shivers that raced through her just from the strong, wide span of his hands at her waist. The way he crowded out all thought as he crowded his body against hers.
Even the roughness, the harsh press of his jeans inseam and the scrape of the hair on his chin and the hard grind of hip against hip surged a sexy thrill from her head to her toes. Piper couldn’t squeeze her legs tight enough, couldn’t rake her nails down the back of his shirt hard enough, couldn’t recapture his mouth fast enough. Nothing was enough.
On a gasp, Ward pulled away. His eyes had darkened to midnight and a satisfied smile played at the edges of his mouth. And when had his hands shifted down to support her ass?
“That’s my pitch.”
She tried—and probably failed—to sound aggrieved. “That? A kiss was your pitch?” Best. Marketing. Ever.
“No. The pitch was my carefully laid-out reasons why a month of your time is more than reasonable to secure the land you need.” Another flash of that wicked grin that would’ve turned her knees to jelly if she’d been standing. “The kiss was my closer.”