On Monday, the third book in the Shore Secrets trilogy releases. Obviously, that means you should binge on the first two to get ready! Come on - what's better on a summer Sunday than relaxing over a good book...or two? 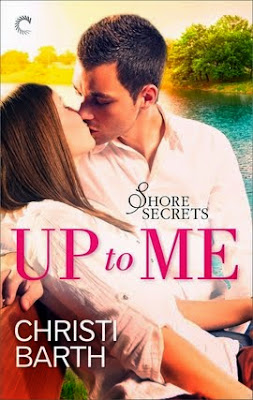 Ella Mayhew's always appreciated the beautiful view of Seneca Lake from the spa window of her family's hotel.But the view improves dramatically when a hot stranger runs across the grounds—shirtless. He's the first man to kickstart her hormones in the three years since she lost her parents, and she doesn't even know his name.Graydon Locke's on his umpteenth undercover assignment. The routine's always the same: assess a business, recommend it for closure, then roll out before anyone discovers his decisions impact hundreds of lives. He's always believed nothing good comes out of small towns. Why would this one be different? Then he makes two classic rookie mistakes—falling for the sweet, sexy girl who owns the very business he's on the verge of axing. And letting the town's residents get involved in both his life, and his relationship with Ella.Ella's the best thing to ever happen to Gray, but he's lied to her from the start. If he pulls the plug on Mayhew Manor, the entire town may crumble. Ella couldn't save her parents, but it's up to her to save their hotel. Even if that means turning her back on true love.

“Come do yoga with me tomorrow.”
“I’m a guy. We’re all about being hard and stiff, not soft and bendy.”
Ella blinked rapidly to clear the images of a naked, hard-muscled Gray that popped into her mind. And hardness…other places. “Don’t be so close-minded. Didn’t you end up enjoying the massage I gave you?”
“Yes.” He sounded adorably sulky at being forced to acknowledge it. Why was it that men found it so hard to admit when they were wrong? Definitely a topic of discussion for her next margarita night with the girls.
“See? You can’t dismiss something out of hand without at least trying it.”
Gray wrinkled his nose. “Do I have a choice?”
“No.” Ella brought up her other hand to cup his face. “You deserve to be looked after. It’s not much, I know, but let me help you in the only way I can.”
“I’ll do it—”
Ella bounced a little. “Terrific.”
“—on one condition. I’ve just come up with a good plan for stress release. Let’s try my way first.” Gray wove his fingers through the loose knit of her turquoise sweater. In one swift move, he pulled it off over her head and tossed it into the corner. “Come swimming with me. Right now.”
Was he serious? To stall for time while she processed the preposterous suggestion, Ella stammered, “We…we don’t have suits.”
“You said the pool’s still officially closed. No one will interrupt us.” He toyed with the strap of her matching tank. “You’ve got this thing. I’m wearing boxer briefs. We’ll be more covered up than in suits. Unless you don’t think you can control yourself around me?”
That was it in a nutshell. Not that she’d admit it to Gray. Not when he had that sharp eyebrow arched and a smug quirk to his lips. If he was trying to shock her…well, he had, no denying that. But what better way was there to embrace life fully than to embrace a dripping wet, mostly naked Gray? While she’d never work up the courage to tell him, this was the kind of activity Dr. T. would probably applaud. Or at least give her a gold star. He had asked her to email him with progress reports if anything big happened. Unable to resist, she glanced down at Gray’s crotch. Ella expected something very big, indeed, was about to happen.
“Water’s extremely therapeutic,” she said in her most serious, I’m massaging you but not judging your naked body in any way professional voice. “Swimming is a good counterpart to yoga. They use the same long muscles.”
Yup. Her matter-of-fact delivery dropped his eyebrow back to its usual straight line and wiped the smug from his lips. Ella kept the surprises rolling. She stood, unbuttoned her skirt and let it slide the floor into a big blue puddle. Then she reached out, grabbed his wrist, and yanked him sideways into the pool with her. 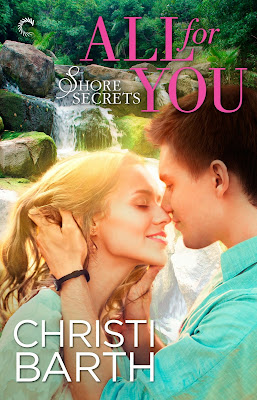 Small-town park ranger Casey Hobbes has spent her life under the radar, carefully guarding a secret. "The forest flirt," as her best friend calls her, keeps things casual with men. That way she'll never care enough to be tempted to share the truth about her past. But when she spots a half-naked stranger on the lake's edge, Casey can't resist his muscles or his charm and she's all-in for enjoying both, while keeping emotion out of it. What could be the danger of one summer fling?Professor Zane Buchanan has built his entire career on exposing the dark realities of cults, but one—the Sunshine Seekers—remains infuriatingly impossible to crack. Zane's shocked to discover its sole anonymous survivor is hiding in his new hometown. It's nearly impossible to concentrate on work, however, when he's derailed by his attraction to the beautiful blonde in khaki uniform shorts.As things between Casey and Zane heat up, she struggles with keeping her past from him. And Zane's on a quest to expose the truth, no matter the consequences. Will their growing emotions finally unseal Casey's big secret? Or will she turn her back on love to keep the past safely buried?

A single vision of six feet of toned muscles and charm tormented her. Her thoughts had slipped back to last night’s lip-lock with the professor…um…often. If often meant reliving it over and over again pretty much every time she blinked.
He’d called her beautiful more than once. His brain had chilled down to a temperature barely warmer than gelato, and yet he’d made a point of complimenting her. Long before he’d put his hands on her. That earned Zane a gold star. Of course, the way he kissed earned him enough stars to fill the Milky Way. That man knew his way around a pair of lips. Casey was far from a virgin. And she enjoyed tiptoeing through the tourists every summer just like all the other local singles.
But he’d stood out. She’d spent all morning trying to figure out why. Was it his commanding strength overlaid with tenderness and finished with a whole lot of sex appeal? Guess she’d lived in the heart of the Finger Lakes wine country too long when she started describing kisses the same way she described a glass of Riesling. Aaand that made Casey think about what it would be like to kiss him with wine-slicked lips. To taste the honey and apricot sweetness on Zane’s rough tongue as it plundered her mouth…
The thwap of the screen door on the outer office sent her hands flying to her face. Casey didn’t blush. Didn’t see a need to be that embarrassed about anything. But she tested the temperature of her cheeks anyway, because her core temp had just shot up ten degrees with that little fantasy. They felt hot. Hopefully anyone looking for brochures or bathrooms—her two most asked questions—would attribute the flush to summer. Even though this early in summer, they’d be lucky to hit eighty by mid-afternoon. Crap. Why was she worried? There was no cartoon thought balloon over her head flashing the words I’m having sexy thoughts in pulsating neon.
Flustered, she smoothed the wispy tendrils at her temples that always escaped her French braid. “I’ll be right out.”
“How about I just come all the way in?” Zane’s head and shoulders popped sideways around the doorframe. His hair flopped over his forehead the tiniest bit. It was adorable. Paired with the ear-to-ear grin, it made him look mischievous. Ready for fun or trouble. Probably both, if last night’s idiotic illicit dive was anything to go by.
“Um, okay.” It surprised Casey how happy she was to see him. God, what was wrong with her? That was as much a lie as the ten pounds she’d shaved off her official weight when she renewed her license last month. And lying to yourself was always pointless. So, yeah—happy to see him. So happy that she did a quick mental check on whether or not she’d worn the lined bra that would hide the effect his presence was having on her nipples.
Posted by Christi Barth at 11:12:00 PM