Release Day of ALL FOR YOU - A Steamy, Small-Town Contemporary Romance!

I'm so excited to share with you the second book in my Shore Secrets trilogy, All For You. Why am I so excited? Because I've got a hero who is a cross between Indiana Jones and Rick Castle. A heroine who puts loyalty above everything else - including what could be her best shot at true love. Steamy kisses (and more!), bromance, banter, and small town quirkiness. The best part? This book stands alone - no need to go back and read the first in the series (although you can....I'd be fine with that....) 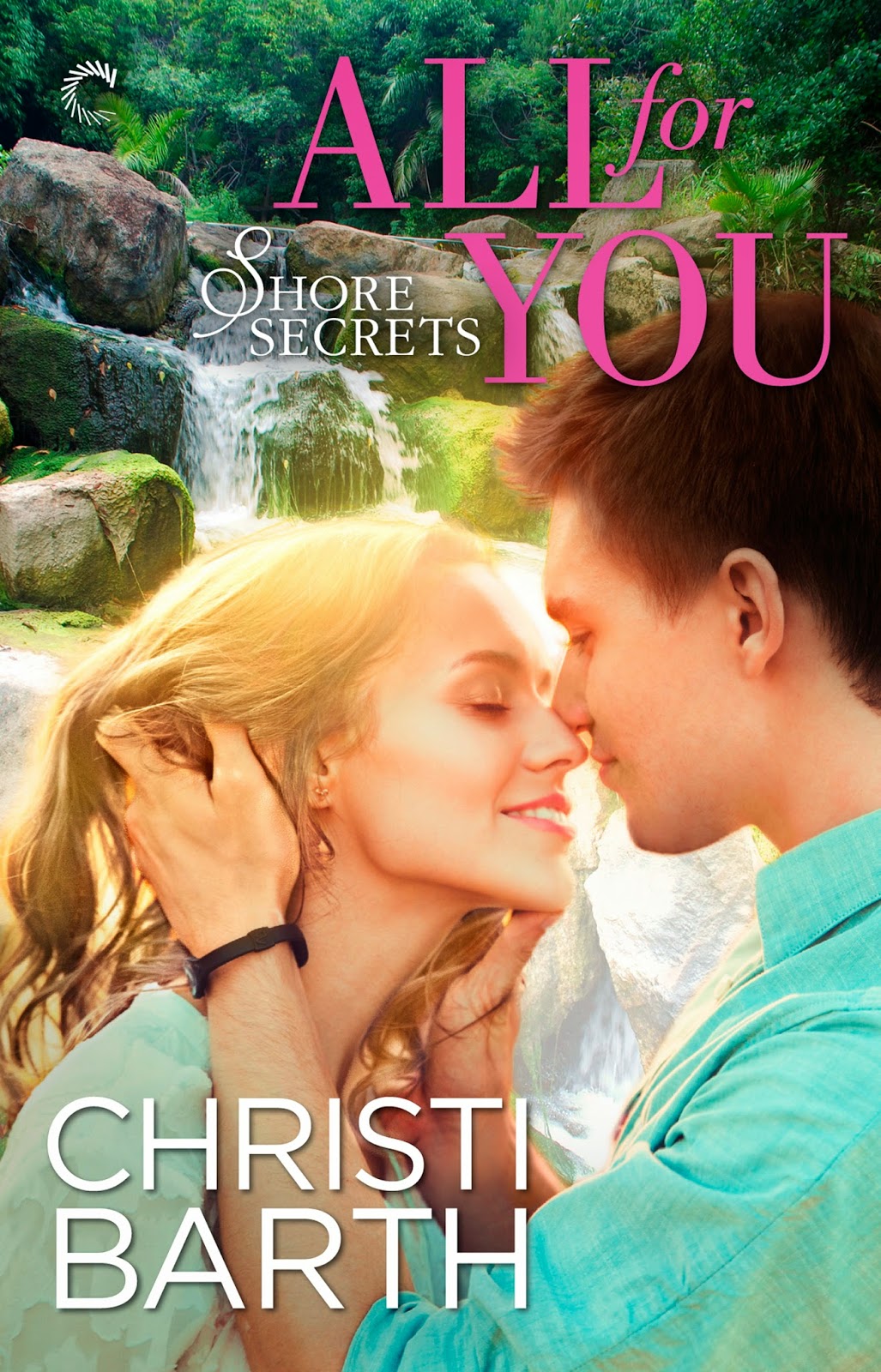 Small-town park ranger Casey Hobbes has spent her life under the radar, carefully guarding a secret. "The forest flirt," as her best friend calls her, keeps things casual with men. That way she'll never care enough to be tempted to share the truth about her past. But when she spots a half-naked stranger on the lake's edge, Casey can't resist his muscles or his charm and she's all-in for enjoying both, while keeping emotion out of it. What could be the danger of one summer fling?

Professor Zane Buchanan has built his entire career on exposing the dark realities of cults, but one—the Sunshine Seekers—remains infuriatingly impossible to crack. Zane's shocked to discover its sole anonymous survivor is hiding in his new hometown. It's nearly impossible to concentrate on work, however, when he's derailed by his attraction to the beautiful blonde in khaki uniform shorts.

As things between Casey and Zane heat up, she struggles with keeping her past from him. And Zane's on a quest to expose the truth, no matter the consequences. Will their growing emotions finally unseal Casey's big secret? Or will she turn her back on love to keep the past safely buried?

Here's a peek at the very beginning to get you hooked!

When Casey Hobbes got an eyeful of the half-naked man emerging from Seneca Lake, she pulled onto the shoulder without even signaling. She could justify the move because he was technically breaking the no swimming after sunset posted rule, even though she was off-duty. Much of her job as a New York state park ranger comprised of reminding people that rules were for their safety. But deep down? Casey wasn’t even kidding herself. It was that impossibly broad chest and shock of dark brown hair mussed over the top of the scuba mask that drew her like a moth to a bug zapper.
Moving fast now, he emerged the rest of the way from the water. It was black, the same color as the night sky above. So although he wasn’t pale, his legs starkly contrasted his surroundings, making him easy to spot in the moonlight. His long, strong legs. Well muscled. Casey liked the looks of a man who worked out. She couldn’t stand the over-pumped gym rats who resembled nothing more than anatomically correct balloon people. No, this guy was just hot. Yummy hot. S’mores melting over a campfire hot.
Or maybe not so hot. Cause he’d wrapped his arms around himself without even removing the scuba tanks strapped onto his back. Even from across the road she could tell he was shivering. See? It didn’t pay to break the rules. What kind of idiot didn’t wear a wetsuit, even in June, to dive in the Finger Lakes? Casey swung her Jeep into the parking lot of the lakefront park and grabbed for the emergency space blanket she kept tucked behind the passenger seat.
Sticking her head out the window, she asked, “Sir, do you need help?”
He shook his head. But his teeth were chattering so hard he couldn’t actually answer. Geez. Why were the hot ones always so dumb? With a sigh, she hopped out. Hurried over, unsnapped the belt at his waist and slipped the straps of his gear down his bare arms with no resistance from him. Probably because his arms were absolutely ice cold. Now they hung limp at his sides.
So she wrapped the blanket around him tight herself. Its foil crinkling scared a flock of geese straight up into the starry sky. Casey rolled her eyes up towards the Big Dipper in exasperation. Great. What was she supposed to do with a six foot tall mansicle frozen in place at the edge of the lake? Knowing body heat was the quickest way to deal with hypothermia, she wrapped her arms around him, too. Tried not to notice that it brought her flush against ridged abs. Or how well her head tucked into the hollow of his collarbone.
This was strictly basic first aid. If he were a woman, or a sixty-year-old guy with a pot belly and a bad comb over, Casey would still be responding the same way. His core temp had to be raised ASAP. But still, it didn’t suck that he was a wall of sheer, solid muscle against her torso. She tucked her thighs and calves along the outside of his, almost hissing at the cold searing every exposed inch between her uniform khaki shorts and the tops of her boots.
“Thanks.”
Surprised his teeth had stopped chattering already, she jerked her head up. But Casey couldn’t see anything behind his fogged-over mask. Only a well-formed pair of lips beneath it. Generous. Curved up just the tiniest bit. Lips that made her want to throw caution to the wind and start nibbling.
“How do you feel?”
“Cold. Prickly, like I’m getting acupuncture from a hundred doctors all at once.”
Whew. No ambulance needed, then. Just her blanket and time. “That sensation will pass. It’s good news, actually, that you aren’t numb at all.”
“Nope. Definitely not numb. ”
Was that a twitch of…seriously…when most of his body still felt like an unthawed surprise from the freezer? Casey released her embrace a split second after he began to push away.
“God, I’m sorry. Really.” He stumbled back a few steps, and his mouth hung open. “That was an involuntary reaction. I mean, you’re beautiful, so it wasn’t entirely involuntary. But it was a purely physical reaction to stimulus. To all of you pressing up against all of me. I swear I’m not trying to accost you.”
Huh. His rapid backpedaling rang true. The stranger appeared to be a genuinely good guy. She’d cut him some slack. Besides, he was still shivering. Whatever little heat she’d imparted to him had all pooled in that overachieving organ tenting the front of his trunks.
“I’m not worried. I can’t imagine anyone committing to hypothermia on the off-chance that a woman might drive by, decide to try to rescue them, and then stick around to get kissed.”
“Kissed? Who said anything about a kiss? Not that I wouldn’t be on board with the idea.” His voice turned smug, even as he tugged the blanket tighter against another round of shivers.
Damn it. Casey certainly hadn’t meant to mention a kiss. She blamed the slip on working overtime three days straight. The height of tourist season here in the Finger Lakes, and yet she’d stupidly offered to cover so one of her rangers could attend a wedding over the weekend. Exhaustion was her only excuse. It had nothing to do with how she could see the leading edge of brown hair across his chest over the criss-crossed top of the blanket.