UP TO ME Is The Kindle Daily Deal - A Romance Bargain You Won't Want To Miss!

The Kindle Daily Deal is a great way to stock up on books - either grab ones you've had your eye on for a while, or take the chance on discovering a new author. I'm thrilled that today UP TO ME is the Kindle Daily Deal - and at only $0.99 for 100,000 words of romantic goodness, that is the best bargain you are going to find no matter how many after Christmas sales you hit! Grab it today at Amazon 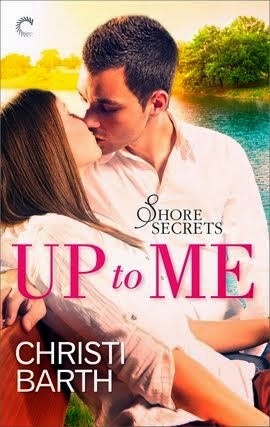 Ella Mayhew's always appreciated the beautiful view of Seneca Lake from the spa window of her family's hotel.But the view improves dramatically when a hot stranger runs across the grounds—shirtless. He's the first man to kickstart her hormones in the three years since she lost her parents, and she doesn't even know his name.

Graydon Locke's on his umpteenth undercover assignment. The routine's always the same: assess a business, recommend it for closure, then roll out before anyone discovers his decisions impact hundreds of lives. He's always believed nothing good comes out of small towns. Why would this one be different? Then he makes two classic rookie mistakes—falling for the sweet, sexy girl who owns the very business he's on the verge of axing. And letting the town's residents get involved in both his life, and his relationship with Ella.

Ella's the best thing to ever happen to Gray, but he's lied to her from the start. If he pulls the plug on Mayhew Manor, the entire town may crumble. Ella couldn't save her parents, but it's up to her to save their hotel. Even if that means turning her back on true love.

Here's a peek at the very beginning: