A Paranormal Debut You Won't Want To Miss!

It took a few tries, and a few years, but my critique partners are the best of the best - like family to me. And I'm beyond thrilled to share that one of them is releasing her DEBUT novel this week. I got to beta read Talent To Burn before it even went out on submission, so I've been a fan of it for a very long time. If you like paranormal suspense that has you gripping the edge of your seat, and romantic tension that drives you to the brink...well, this is the book for you. 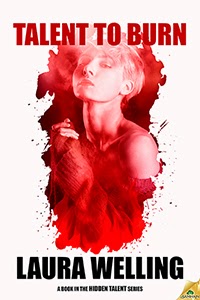 Passion burns. Betrayal scars.
Cat Wilson grew up a misfit among misfits. She couldn’t read minds, see the future, or start fires like the other Talented kids inside the shadowy Grey Institute. Finally she ran, leaving her beloved brother, Eric, behind. She’s been running ever since.

When she learns that Eric has escaped, leaving deadly fires in his wake, Cat is torn between fear for her brother, and unwanted attraction to the messenger, a charming, Talented ex-con who lives for the next adrenaline rush.

Jamie Murphy is sure his group of outcast Talents can help Eric—if they can get to him before the cops or the Institute, and before he kills again. Cat’s aversion to Talented bad boys is like a wall of ice, but to his surprise, he doesn’t have to use an ounce of his own unique gift to find a way through it.
Yet locating Eric is only the beginning. In the battle to pull him back from the brink, Cat must find the courage to unlock a fearsome Talent of her own. And pray the psychic backdraft doesn’t destroy everyone she loves.

Talent To Burn Buy Links: Samhain | Amazon | Barnes & Noble | Kobo | Google Play
EXCERPT
The place held echoes of a thousand other bars, although the fire had painted everything black. The cheap tables looked worse for wear, lopsidedly melted. The bar still stood, and was toward the back of the venue, with a line of bar stools in front of it.
“Do you know much about fires?” Jamie asked.
“Nothing technical.”
“Look, here,” he said gesturing at the remnants of what had been bar stools. “See how these have melted, but this one at the end is intact?” I looked where he pointed. A fan of burn marks spread out from the untouched stool.
“I guess Eric must have been sitting there.” I rubbed at my arms, which were covered in goose bumps. Thinking about what had happened here made my stomach twist. God, I hoped I wouldn’t vomit. People had died here, right where I stood. I cringed inwardly. “You think he burned them where they sat drinking?”
“That adds up with what we heard in the initial reports. One minute it’s a normal night out, and then everybody—and everything—is on fire.” He paused, looking around, but his expression was neutral. “I wonder what happened then. I guess Eric took off.”
I tried to imagine what could have caused my brother to start the fire. Had someone attacked him? Was it some kind of freak accident? “If you’d started this fire, what would you do next?”
Jamie looked directly at me. “I’d run like hell and hope the cops never found me. Do you see anything else?”
“A lot of mess and water and charcoal.” I closed my eyes. I couldn’t close out the smells, or the images of horror filling my mind. I could never un-see this.
“I mean, do you see anything?”
I fought the urge to punch him. “I never see anything. I’ve told you before.”
“Sorry,” Jamie said. “I know this must be harrowing for you.”
His hand landed on my bare arm, hot against my skin, and I plunged into a waking dream.

engineer. She's Australian but lives in the United States on a horse farm, which she shares with her family, an over-sized dog, and various horses, cats and chickens. She is a compulsive reader of all genre fiction, who started reading before the age of two, and never stopped. She wrote her first “book” when she was five—a spy story, which has since been joined in a bottom drawer by various other early attempts.

This book was inspired by some of her favorite stories: Anne McCaffrey’s science fiction novels, Marvel’s X-Men comics, and The X-Files television series.