Yup - it is finally here - the Christmas novella you've all been waiting for....since my last one came out 360 days ago. Tinsel My Heart is special to me, because it's loosely based on a very real holiday show I starred in for four years. Without the devestatingly handsome director, sadly. It is chock full of snow-melting kisses and holiday goodness. Here's the scoop: 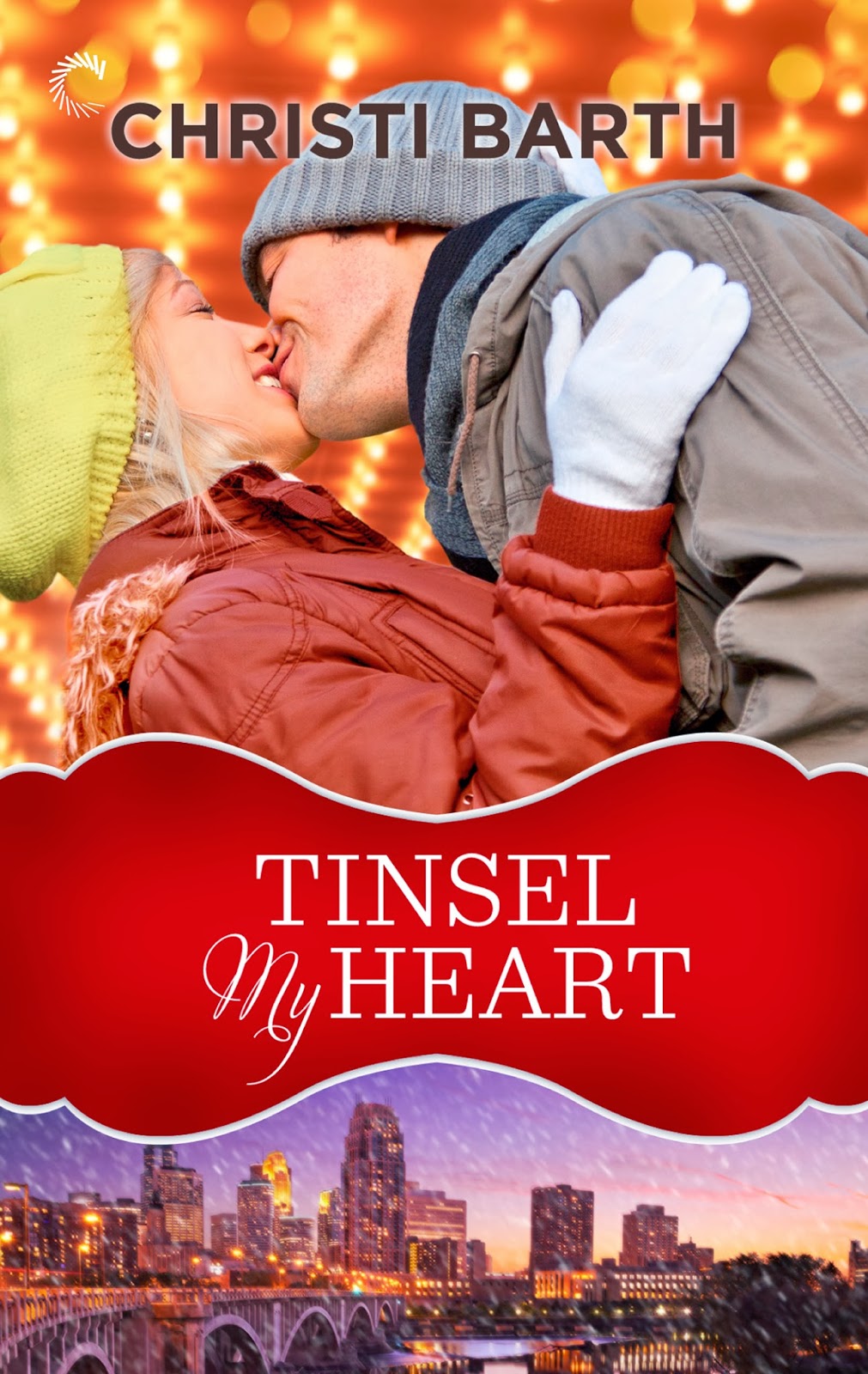 Becca Huntley’s produced the Lyndale Park Player’s over-the-top Christmas pageant for ten years. The beloved Minneapolis tradition is the theatre’s main fundraiser. But this year’s production is almost canceled when their director disappears into rehab at the last minute. Good thing his directing partner steps in to save the day. Except for the minor fact that he hates everything about Christmas.
Jack Whittaker wiped the Twin Cities off his shoe with his graduation tassel and never looked back. But duty compels him to fulfill Tyler’s promise to direct the show. Even though it means working side-by-side with Becca, the girl he always wanted, lost to Ty, but never forgot.
It’ll take more than a few handfuls of tinsel to soften Jack’s heart toward Becca’s favorite holiday. Steamy kisses that melt the snow right off his boots are a step in the right direction. They’ll both discover that Christmas is about making each other's dreams come true. But will doing so destroy their chance at a happily-ever-after together?
Purchase at Y Amazon Y Barnes & Noble Y Carina Press


She picked up the end of her braid and tickled his cheek. “Told ya.”


The silken hair set off a chain reaction in his body. Blood pounded south in great, galloping leaps and bounds to pool in his crotch. Jack hadn’t experienced an insta-hard-on like that in years. He quickly shifted the black script binder across his lap.


“Since high school? I would hope so.” Then her lips pursed. “Okay, you’ve piqued my curiosity. Exactly how have I changed?”


“You’ve grown from a pretty girl into a beautiful woman.”


“Oh.” Her pale cheeks turned the color of ripe strawberries. It made Jack wonder if her nipples were the same color. Or would turn that color after he used his lips on them. “Um, thank you. And let me just say that adding a few pounds of pure muscle didn’t hurt you any, either.”


Interesting. Might as well push a little harder, see what developed. “Here I thought you were going to comment on my righteously masculine goatee.”


As if lifted by marionette strings, her hand rose, scraped along the end-of-day stubble on his cheeks to trace the outline of the goatee. “It, ah, makes you look devilish.”


“Want to dance with the devil?”


“What?” Her gaze flew up to meet his as her hands dropped to her lap. “You want to dance?”


Super literal people made flirting much more difficult. Jack sighed. “Metaphorically.” When she still looked bewildered, he continued. “Forget it. Do you want to have dinner with me?”


She blinked, rapidly. Looked down at her hands twisting together. “That depends.”


It wasn’t a complicated question. Jack didn’t want her take on the crisis in Syria. Why would a simple dinner invite come with conditions? “On what?”


Becca looked over both shoulders, as if to check they were still alone. Or as alone as you could get in a three hundred-seat theatre full of people milling about from the lobby to the dressing rooms. “Are you just lonely, Jack? Because of Ty?”


Now he got it. Well, he didn’t get why she had the crazy female insecurity, but at least he knew what she was driving at. “I want to have dinner with you. Only you. Not because we used to be good friends. Not even because we’ve slid pretty well back into those roles. And not just dinner.” Jack grasped her chin between his thumb and forefinger. “You’re a beautiful woman who heats me up every time you slide those cool lake eyes over me. With enough talent and know-how and passion for my business to make for interesting conversation. So what I want from you, Becca, is a date.”


To his utter surprise, she didn’t blush again. Or look away. Or for that matter, look flustered at all. Instead, she mimicked his pose, putting her hand to his mouth. Rubbed her soft thumb in a slow glide across his lower lip. Her eyes darkened from the clear blue of Lake Harriet in the summer to the darkness of a winter’s night.


No matter how many he tried on for size, women never failed to confound him. Jack didn’t know what he’d said to peel off her timidity. Didn’t care, either. Just looked forward to an evening filled with more surprises from the woman he was discovering he liked even more than the girl he used to adore.
Posted by Christi Barth at 3:00:00 AM