I've been immersed in the goodness of release week for Friends To Lovers, book 3 in the Aisle Bound series. But today, I step back a book, to #2 in the series, A Fine Romance - because it is the Kindle Daily Deal for only $0.99! Here's all you need to know: there's a chocolate covered sex scene. Makes you want to drop everything and buy it right now, doesn't it? Okay, click here to snap it up! Well, just to cover my bases, I'll give you a few more details so  you can convince your friends and colleagues to go drop their $0.99 on this funny, sexy contemporary romance set in Chicago. 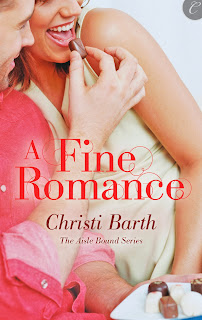 They say you form your first impression of someone within thirty seconds of meeting them. Or, in Mira Parrish's case, within thirty minutes of not meeting them, when said person is supposed to pick you up from the airport and never shows. This is not a perfect start to her new life. Her friend Ivy is depending on her to run a new romance store, and Mira can't afford to let her down.

Sam Lyons should probably apologize. But every time he sees Mira—which is often, since his family owns the bakery next to her shop—he can't resist antagonizing her. There's something about the sexy, straitlaced woman that drives him crazy. He can't get involved, though. He has too much baggage to be any good in a serious relationship.

Despite his teasing attitude, Mira finds Sam too sweet to resist. (His hot body may be a factor.) But if there's going to be anything permanent between them, they'll need to let go of their pasts and look to the future…


Excerpt:
She wore an air of mystery, almost like she knew something Sam didn’t about tonight. Funny, since he was the one surprising her. Or was it that Mira thought she was the one pulling his strings? Well, he’d put a stop to that. Sam didn’t need to be in charge, but he did need them to be on even footing. Might have to step it up a notch already. He faced her and rested his hands loosely on her waist. And tried not to think how fantastic it would be to cup her rounded hips and rock her back and forth on top of him.


“I’m sure I want another date with you, Mira. Want to know why?”


“You’re like a cannoli. They aren’t chocolate, so I assume you’ve had one?”


She nodded again, with a mystified smile.


“Their outer layer seems both indestructible and brittle. Once you break through, the center is sweet and creamy, yet still studded with interesting surprises of nuts and dried fruit. One bite is never enough. Oh, and that dusting of powdered sugar makes them delicately beautiful. And you are the most beautiful woman I’ve ever seen.”


Mira’s eyelids drooped heavily—the personification of bedroom eyes. A faint blush that matched the nearest rosebush pinked her cheeks. Then her tongue slipped out to moisten her lips. It did him in. Sam tightened his grip, pulling her so close he felt the rapid rise and fall of her chest.


Sam wondered if she was one of those ultra-feminists who got offended by an honest compliment. Damn it, was she mad or aroused? Why couldn’t he figure her out? “I chose this location carefully. We’re surrounded by nature, not knickknacks. There’s nothing here you can use to assault me.”


“Not true. There’s one thing.” Mira launched herself at him, throwing both arms around his neck. Instinct lowered his hands to her tight, curvy ass for a better grip. Sam barely managed to keep both of them from toppling into the fountain. He did stagger backward a few steps until the spray misted them lightly.


The heat of the late-afternoon sun on his back didn’t come close to matching the heat she kindled between them. Eagerly, Sam sank into those luscious lips. She took quick nibbles, even nipping. A zing shot straight down to his dick. Yeah, if this was her taking charge, sign him up for more of that!


With a final lick around the outline of his lips, she slid her tongue inside. And Mira didn’t stay still. No, she wriggled against him. He wouldn’t be able to hold on to her much longer. The heavy scent of roses twined around them like something out of a fairy tale. From now on, whenever Sam smelled roses, he’d feel Mira’s breasts tautly pushing against his chest. He’d remember the perfection of her kisses, and the silken glide of her legs against his. No doubt he’d go from zero to titanium-hard in two seconds.

She broke away first. “You were right. Another date is inevitable.”

As a reminder, you can grab the Kindle Daily Deal here. And please, don't keep this great deal to yourself  - share the news!
Posted by Christi Barth at 7:13:00 AM