Add Some Rockin' Sizzle to Your Summer & Win a $25 Gift Card! 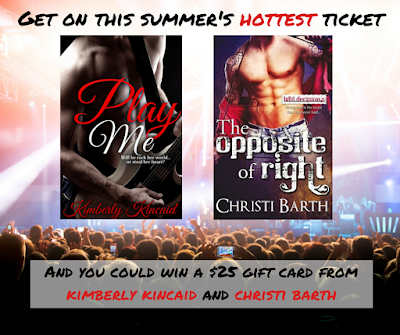 If you ever turn on the radio, you've been barraged with ads for summer concert season. Guess what - romance readers can get in on the fun! Because Kimberly Kincaid and I decided to take our rock star novellas on a quick tour.

Play Me and The Opposite of Right are great beach reads - or great to read on the lawn waiting for your fave rock group to start their concert! Today through July 1 we're giving readers the opportunity to win a $25 gift card, just for sharing our FB pages! Just go to Kim's page and mine and follow the instructions there. And don't forget to take this opportunity to add them both to your ereader to add some rockin' sizzle to your summer.

Here's the blurb to Play Me:
As the daughter of rock and roll’s most notorious producer, Sophie Drayton has seen enough bright lights and big city to last ’til she’s ninety. Now that she’s ditched the wild life in LA to pursue her passion for books, she wants nothing more than to live on the straight and narrow. The last thing Sophie needs is the attention of a cocky bad boy stripper…no matter how sexy his smile is.
Emilio Barrett knows all about cover-ups—after all, his job is just one act after another. He can tell there’s more to feisty, guarded Sophie than she lets on. But Emilio has secrets of his own. His true lifeblood lies in music, and he’s getting tired of leading two lives on stage. He’ll do whatever it takes to get his break. The more Sophie and Emilio get to know each other, the more they discover they’re not as different as they seem. But when her past collides with his truths, will Sophie’s defenses win out, or will Emilio prove that a bad boy can also be a good man?

and The Opposite of Right (book 1 in the Bad Decisions series):
Kylie Stafford has spent her whole life doing exactly what’s expected. The right major, the right sorority, the right guys, just like her mother and her sister before her. But when everything falls apart for her, Kylie wonders if doing everything right has been utterly wrong. There’s only one way to find out. She decides to try making all the wrong choices for three months. Hit on a tattoo-covered rock musician? Check. Go back to his dressing room for a hot hook-up against the wall? Gulp. Drop everything to be a roadie for him to binge on more of the best sex of her life? Maybe. Start falling for him despite her better judgment? Um….yeah. Figure out why doing everything that seems wrong feels so darn right?