People who know me will tell you that I'm prone to exaggeration. I'll cover my whole hand in gauze for a paper cut. Say I have 800 chapters left to write before deadline in a book that actually only has eighteen total. But guys, this is no exaggeration, I promise: the BEST BOOK OF THE YEAR releases today - Laura Kaye's Hard to Come By.

It is book 3 in her spectacular Hard Ink series. Packed with action, suspense, romance and some of the hottest sex I've ever read. On top of all that, it includes my favorite hero of the whole series, Marz. Don't think about it. Don't worry about whether or not you've read the rest of the series. Just go get this book. Right. Now. 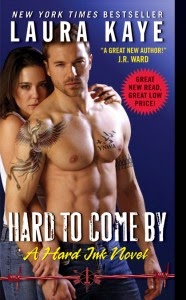 Caught between desire and loyalty…
Derek DiMarzio would do anything for the members of his disgraced Special Forces team—sacrifice his body, help a former teammate with a covert operation to restore their honor, and even go behind enemy lines. He just never expected to want the beautiful woman he found there.
When a sexy stranger asks questions about her brother, Emilie Garza is torn between loyalty to the brother she once idolized and fear of the war-changed man he's become. Derek’s easy smile and quiet strength tempt Emilie to open up, igniting the desire between them and leading Derek to crave a woman he shouldn’t trust.
As the team’s investigation reveals how powerful their enemies are, Derek and Emilie must prove where their loyalties lie before hearts are broken and lives are lost. Because love is too hard to come by to let slip away…

Hard to Come By on Goodreads