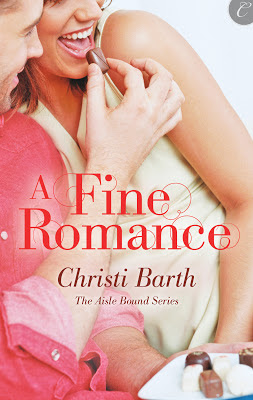 It was just over a year ago that I began writing A Fine Romance. It's the second book in my Aisle Bound series, so I had to write it before the first book even came out. Kind of like writing in a vacuum, unsure if anyone would like book one or not, want to see more of the characters, etc. Happily, my readers liked book one. So I'm super excited to spread the word about release day of this sexy, chocolate-filled romance. Here's a taste:

They say you form your first impression of someone within thirty seconds of meeting them. Or, in Mira Parrish's case, within thirty minutes of not meeting them, when said person is supposed to pick you up from the airport and never shows. This is not a perfect start to her new life. Her friend Ivy is depending on her to run a new romance store, and Mira can't afford to let her down. Sam Lyons should probably apologize. But every time he sees Mira--which is often, since his family owns the bakery next to her shop--he can't resist antagonizing her. There's something about the sexy, straight-laced woman that drives him crazy. He can't get involved, though. He has too much baggage to be any good in a serious relationship.  Despite his teasing attitude, Mira finds Sam too sweet to resist. (His hot body may be a factor.) But if there's going to be anything permanent between them, they'll need to let go of their pasts and look to the future...

Grab it today at Carina Press!
Posted by Christi Barth at 9:52:00 AM