New Release Announcement - Riptide is Back for an Encore!

I'm so excited to share that it is release day for The Other Side of Wrong - book 3 in the Bad Decisions series!!!! Now, I promise it is absolutely a stand alone, so you can jump right into the series with this book. But, um, why wouldn't you want to turn into a Riptide groupie and read all three?

I knew as soon as I came up with the idea for a rock star series that I had to have one with a female rock star. It was so much fun to write Cassidy to be one of the biggest pop stars ever. The only hero who could be a match? Rock star Jake McQuinn, who knows exactly what the demands and rigors of touring and making music can be. Yet somehow, they squeeze in all the secret sex.... Because if the rest of the band found out, it might tear apart their friendship forever. 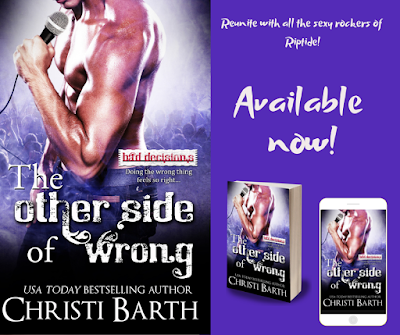 Jake McQuinn’s lived and loved the rock-star lifestyle. But a family scandal ripped him away from his band and back home. Back to boredom, a buttoned-up sham of a job, and a desperate need to whitewash his image. His family’s pharmaceutical company could crumble without him. His band’s epic comeback won’t happen without him. How’s he supposed to choose which one to save?

Cassidy--just one name as befits one of the biggest pop stars on the planet--has discovered the downside to fame. Finding a decent guy to date who understands her demanding career and crazy schedule? Impossible. Until she remembers the rocker who almost rocked her world a few years ago…

Jake thought he walked away from her for all the right reasons. Cassidy, however, intends to get him back. And she’s going to use his band’s shot at redemption and rock legend status as leverage. If she convinces him to date her again and drop the good guy routine? Even better. Doing the right thing for everyone else feels so wrong for Jake. And making a bad decision about hooking up with Cassidy could be the best thing yet…