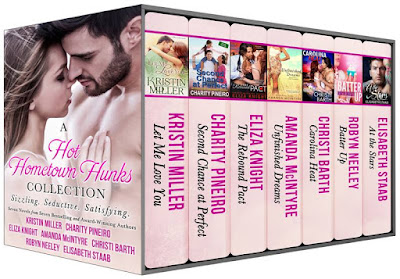 If you like contemporary romance, you'll LOVE getting SEVEN books in one giant box set. It is a great way to sample different lengths and different sub-genres, from foodie romance to small-town to romantic suspense. The best part of all? You get all seven for only $0.99. So don't wait - pre-order now at Amazon, and just count the days until it appears on your device on October 6!

Investigative journalist Annabelle Carlyle goes undercover in Charleston when her best friend disappears. Before she finds a single clue, she runs into a sexy man she can't shake. Tall, dark and charming, Mark Dering is happy to show the gorgeous Yankee his hometown. Soon they're knee deep in a mystery that goes all the way back to the Civil War. The stakes grow higher when a body is discovered. With a killer on the loose, it's the worst possible moment for Mark to try and unlock Annabelle's heart. Or is love exactly what her life's been missing?
Posted by Christi Barth at 2:43:00 PM No comments: 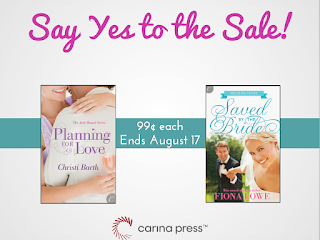 The first book in my Chicago Aisle Bound wedding series, Planning for Love,is on massive sale-only $0.99! Here's a blurb to tell you what it's all about:

Wedding planner Ivy Rhodes is the best in the business, and she's not about to let a personal problem stop her from getting ahead. So when she's asked to star in the reality TV show Planning for Love, it doesn't matter that the show's videographer happens to be a recent--and heartbreaking--one-night stand.

Bennett Westcott admits he didn't handle his encounter with Ivy very well. But looking at her beautiful smile--and great body--through a camera lens every day? He can't be faulted for suggesting they have some no-strings fun.

This book is funny, sexy, and sweet.  I promise!  And you don't have to take my word for it - Publisher's Weekly and RT Book Reviews have already raved about it.  So if you want to snap up a great beach read (or have something to pick up your spirits if you aren't headed to the beach), this is your chance.  Please dig in, enjoy a few giggles, a few heart-stoppingly sexy scenes, and a lot of romance.

Excerpt:
“I want to taste you, Ivy.” The scrape of his feet against the stones came to a halt. A gentle nudge with his forehead tipped her head back. Their eyes locked. “Why don’t we get a jump on the inevitable? Because I don’t want to wait another moment.”
Ivy had a split second to decide. Stick to her guns—and her professional ethics—and slip out of his arms? Or stay and lock lips with a super sexy man in the moonlight? Really, it was easiest to not decide at all. Her eyelids drifted shut as she waited for Ben to make his move. And waited. Nothing happened. She peeked out from beneath her lashes to see the merest hint of a smirk lifting the edges of Ben’s mouth. Her eyes flew open the rest of the way.
“What? What happened to the tasting and the moment?”
“The moment’s not right until you decide to commit to it. I promised earlier I wouldn’t steal any more kisses from you. Kissing is interactive. A two-way street. You’ve got to choose to slide behind the wheel and turn the key.”
Why did men turn everything in life into a car metaphor? Well, she could play along. Despite showing every sign of being something of a player, Ben had shown her, with that one little pause, that he also had bucket loads of integrity. No sane, single woman could turn down an honest to goodness gentleman. They were a rare breed, and she didn’t intend to waste this particular chance sighting. Time to seize the day...or at least what was left of the night.
“Oh, my motor’s fully revved. You’d better buckle your seatbelt, Mr. Westcott.”
Ivy tightened her grip around his neck and went up on her tiptoes to reach his mouth. The mouth she’d stared at off and on all day, remembering the firm albeit brief feel of his lips against hers. He wasn’t the only one who wanted a taste. She puckered up and planted a soft kiss. And then Ben quite expertly elbowed his way back into the driver’s seat.
His lips slanted hard across hers, instantly ratcheting the level of heat up from tender to full on sizzle. This was no getting-to-know-you smooch. Ben claimed her mouth with possessive pressure. His teeth nibbled open her lips, allowing his tongue to sweep inside. Her moan of pleasure was all the urging he needed to slide his hands down to not only cup her ass, but lift her off the ground.
Ivy’s world spun. Under the spell of the spring night, she’d yearned for nothing more than a touch, a quiet kiss. She’d wanted a sip of water to slake her lustful thirst. Instead, Ben’s kisses drowned her in a downpour of passion and heat. The arch of her foot curved around his calf, looking for something to ground her. Each stroke of his tongue ignited an array of sparks behind her closed eyes. He tore his mouth away but hovered his lips a breath away from hers. Eyes heavy lidded, he moved not at all, aside from the pounding of his heart thumping through his tuxedo shirt. Suddenly, she realized what he waited to hear.
“Okay, Ben. You’ve convinced me to have a drink with you.”
A hum of approval sounded low in his throat. He buried his face in the curve of her neck. And then from somewhere behind them, a short high gasp, and the unmistakable crash of glass breaking on the stone floor. Ben’s grip bobbled, but he didn’t drop her.
“Get your hands off my friend’s ass right now, or I’ll call in someone a lot bigger than me to make you.”
Posted by Christi Barth at 10:58:00 AM No comments: